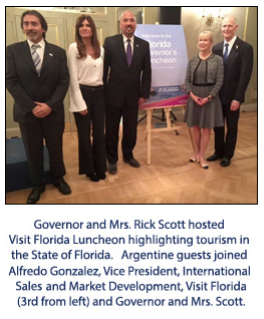 A Florida trade mission to Argentina was conducted in April, led by Governor Scott and bolstered by more than 60 business leaders from the Sunshine State. TVEDC President & CEO Keith Norden was invited to be a part of the delegation. This was the rst U.S. Governor led mission to Argentina in fteen years, which helped strengthen relations between Argentina and Florida. Keith Norden's participation marked his fth international trade mission led by Governor Scott.

"It was a true honor to meet with Argentine President Mauricio Macri to discuss growing business opportunities and trade investments between our home countries," said Governor Scott. "President Macri is already working hard to create robust economic opportunities for his country and has demonstrated a commitment to pursuing closer trade relations with Florida and the United States."

A highlight of the trade mission was a Florida Reception held at the residence of the United States Ambassador in Buenos Aires. More than 200 Argentine guests attended the event and were hosted by Governor and Mrs. Scott and the Florida delegation.

Nearly 40 small and medium-sized businesses that participated in the trade mission reported sales logged during the event of $1.85 million. In the months following the trade mission, these companies projected more than $24 million in expected sales. Keith Norden is currently in discussions with some leaders from the Argentine companies who expressed interest in Volusia County.