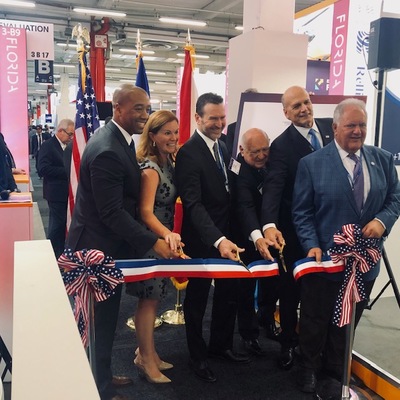 Team Volusia Economic Development Corporation represented Volusia County at the International Paris Air Show in June. The event allowed local Florida representatives access to the movers and shakers of the aviation/aerospace and defense industries and is considered, along with the UK's Farnborough Air Show, to be the most important events in the industry.

More than 2,450 exhibitors from 48 countries participated. There were 26 national pavilions, 140 aircraft presented in flight and/or at static displays, and 3,450 credentialed journalists covering the event. France's President Emmanuel Macron opened the event again this year and welcomed 276 official foreign delegations from 98 countries, along with 140,000 attendees.

Volusia County's presence was highlighted by the collaboration of Team Volusia with Space Florida, Enterprise Florida, Florida Power & Light (FPL), Embry-Riddle Aeronautical University and others. Team Volusia alongside select Florida communities were housed in the Powering Florida exhibit hosted by Florida Power & Light, conveniently located nearby the Embry-Riddle Aeronautical University exhibit, within the Florida Pavilion. Having the privilege of being invited to exhibit with FPL in its Powering Florida exhibit, we regularly displayed Volusia County advantages and details on a large interactive screen for all attendees to see.

While delegate traffic was substantial throughout the show, Team Volusia had ten pre-arranged appointments with prospective companies who were in attendance. Conversations with the prospects were positive and have led to subsequent contact. The Paris Air Show also provided a forum for reconnecting with prior leads and prospects – and there is so much good news emanating from Volusia County that our story was met with great enthusiasm.

One of the highlights of the Paris Air Show was the announcement of Arralis, a global aerospace communication leader, who will establish a presence within Embry-Riddle Aeronautical University’s Research Park.  Company representatives attended the announcement by Embry-Riddle Aeronautical University President P. Barry Butler.  Also attending the show and announcement were the University Board of Trustees Chair Mori Hosseini and Dr. Charles Duva, a member of the Embry-Riddle Board of Trustees as well as current Chair of Team Volusia Economic Development Corporation.  The recruitment of Arralis was a highly collaborative effort by Embry-Riddle Aeronautical University, Team Volusia EDC, Enterprise Florida, Space Florida, Volusia County, the CEO Business Alliance, Daytona Regional Chamber of Commerce, City of Daytona Beach among others.  Arralis will produce two dozen high paying jobs and illustrates Volusia County’s growing presence in the aviation/aerospace sector.