How Women In STEM Shape The Greater Daytona Region 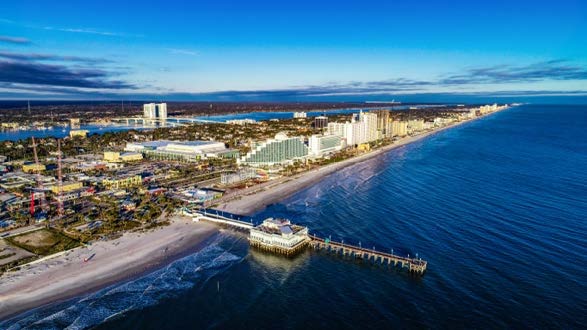 From world-renowned educational institutions to real- time research and development that happens every day, STEM (or science, technology, engineering, and mathematics) is an essential part of the Greater Daytona Region’s economic climate and culture.

In honor of Women’s History Month this March, Team Volusia is taking a closer look at how women have been spearheading STEM innovations in the local area — and how their work continues to propel the Greater Daytona Region to new heights (literally). Just read on to learn more.

Over the years, many a great female innovator has called the Greater Daytona Region “home.” Take, for example:

Today, higher-education opportunities abound for students interested in pursuing STEM — especially at Embry-Riddle, which is particularly respected for its achievements in aviation (and is ranked U.S. News’ No. 10 university in the South). But did you know that Volusia County bolsters women’s involvement in the field even earlier than college?

At Embry-Riddle alone, several programs are dedicated to promoting STEM interest for K-12 students — including the Society of Women Engineers, which works with local schools to bring engaging experiments to young minds. Or WISER (aka Women in Science Embry-Riddle), a group that aims to foster professional interest in science among female high school students.

The eye toward STEM extends toward economic investments, too. In 2021, Volusia County Schools received a $50,000 FIRST (For Inspiration & Recognition in Science and Technology) Equity Grant — designated for use in robotics programs and to “enhance the district’s work on equity, inclusion, and diversity,” according to VCS. And excitingly, as part of the grant, teachers “will receive training on robotics programs and on how to recruit and retain female and minority student participants.”

At Team Volusia, we’re proud to be part of facilitating a growing (and thriving) STEM scene in our target industries — including aviation, aerospace, and advanced manufacturing. Not only are these positions abundant (several of the region’s top private-sector employers are healthcare, education, and manufacturing-oriented), but local programs are designed to pair them with passionate candidates. There’s the Advanced Technology College at Daytona State College, which provides specialized training to make potential employees that much more prepared for technical roles — as well as the school’s Center for Business and Industry, which focuses on continuing education opportunities for a variety of applications.

Interested in learning more about growing in (or relocating to) the Greater Daytona Region? Consider Team Volusia your go-to expert — for everything from tapping into the local workforce, or choosing the best site for your operation. We look forward to working with you on this exciting next step.