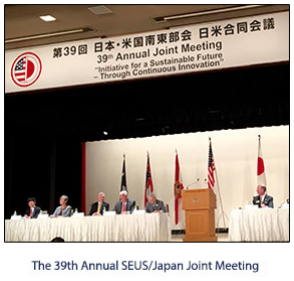 he 39th Annual SEUS/Japan Joint Meeting was held in Japan from September 20 to 22. Florida Secretary of State, Kenneth Detzner, officially led the Florida Delegation of 30 delegates to the 39th Annual Joint Meeting of Japan-U.S. Southeast and SEUS/Japan Associations. Florida Delegation Chairman, Keith Norden, served as codelegation leader. The conference highlighted ties between the Southeastern member states and Japan and was attended by over 250 delegates. The Japanese Consul General of Miami, The Honorable Ken Okaniwa, and other high-level Japanese officials participated in the conference. The Senior Advisor to the Board of Toshiba Corporation, Tokyo headquarters, chaired this year’s joint meeting.

Approximately 90 companies were in attendance and remained for a business networking event hosted by JETRO.

The Workshop and Florida Seminar was spearheaded by the Consul General of Japan in Miami, Ken Okaniwa, which was organized following his February visit to Volusia County. While here, he met with officials of Daytona Beach International Airport and Embry-Riddle Aeronautical University, Volusia County Manager, Jim Dinneen, and Daytona Beach Mayor, Derrick Henry. The Consul General also attended the Daytona Regional Chamber of Commerce’s Annual Meeting where he was welcomed by dozens of local business leaders.

According to Enterprise Florida, Inc., Florida is home to some 200 Japanese companies that employ approximately 26,000 Floridians. On a local note, Toyota was the founding sponsor of the $400 million Daytona Rising project.